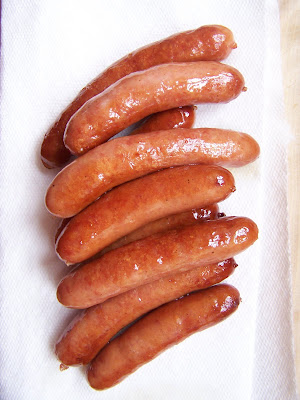 Arabiki
What's Arabiki? One answer would be, an onomatopoeic word for the sound these little sausages make when you bite into them. They have a very distinct snap and crunch to them. The other answer is, a delicious, Japanese style, finger sized, smoky pork sausage. 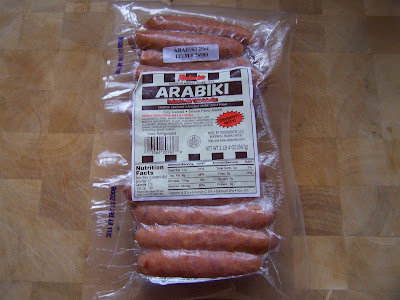 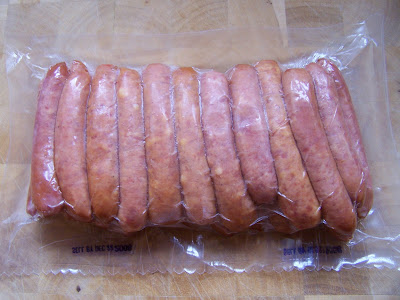 The Reverse Side
Arabiki(s) are a relative newcomer to the Hawaii sausage scene but they seem to have quickly and easily secured their place in the sausage line-up as evidenced by these 20 oz. jumbo packs of Redondo's Brand Arabiki available at Costco in Hawaii. Supply and demand is a reflection of popularity so if Costco is carrying these, they must be popular! 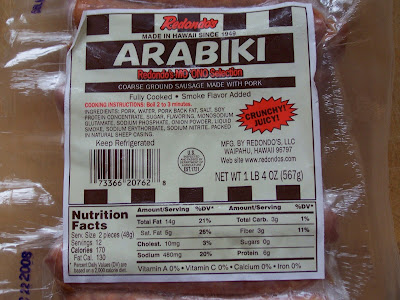 And then there are the "other things". Mono sodium glutamate-msg (a little won't kill you), sodium phosphate-WTF? sodium erythorbate, and sodium nitrite-again, WTF?

Okay, most of those ingredients I'm familiar with, but those chemical thingies? Further research was called for. According to Wikipedia, monosodium glutamate is a flavor enhancer-most of us are familiar with, sodium phosphate acts as an emulsifier, sodium erythorbate is an antioxidant which preserves color, and sodium nitrite is a color fixative and flavor enhancer. Wikipedia also interestingly lists that sodium nitrite has also been used as an antidote for cyanide poisoning among other uses. Wow. Why didn't they just say so!

I know the FDA makes food producers list all the ingredients that go into their finished products and I can understand there are good reasons behind their policies but perhaps they could extend a little poetic license when it comes to describing some of these ingredients.

What if you read the side of a box and the list of ingredients read something like this;

Would you readily put whatever that is in your mouth? Does that sound appealing at all? What if I told you the box you were reading was an egg carton and the list represents the chemical make-up of a chicken egg? Well, why didn't you just say egg in the first place? By comparison, our little sausages here could almost be described as "all natural". Almost, that is.

I think Redondo's could drop all the "sodium's" and still put out a great product and I don't think the taste would be affected much either. Of course they would have to be eaten sooner than later and they may not retain their color as well but they usually don't last long enough in this house to be adversely affected by the lack of artificial additives and preservatives anyway.

Coarse and Tasty
Okay, diatribe over, back to the sausages. The cooking instructions on the package says "boil 2 to 3 minutes". Although they are good prepared this way, I like to fry them or grill them. Direct heat brings out all the flavor in these things and as long as they don't burst while cooking, they retain all their succulent juiciness and crunch just like the label says in that screaming red bubble on the package. The texture of the coarse ground pork and the smokiness are reminiscent of a kielbasa style sausage but with a slight hot doggyness to it, perhaps due to the aforementioned "additives". 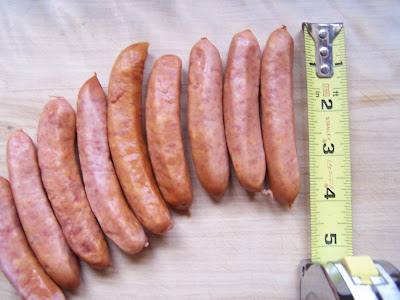 Index, Middle, Ring, Pinky....
Although diminutive in size, each sausage packs a wallop of flavor. They're so addicting, be sure to wear gloves while eating so you won't accidentally gnaw your fingers off. The package also states, serving size, 2 pieces..... Okay, on what planet? 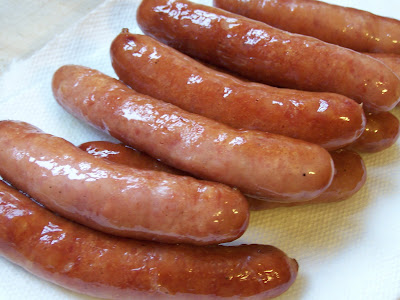 Kitchen Forager Serving Size
Posted by B at 3:14 PM

Thanks for the great translation/explanation! I always wondered what the origins of the word was. It's such a fun sounding word. Now I know what to tell my friends when they ask.